Unacademy is an Indian online education platform headquartered in Bangalore. Initially started as a YouTube channel in 2010 by Gaurav Munjal and In 2015 Unacademy officially got launched by Gaurav Munjal, Roman Saini ( EX-IAS ), and Hemesh Singh.

Today, the company has achieved astonishing growth with over 18,000 educators and over 15 million users on its platform in few years. Let’s see the Unacademy business model after a short glance at the Company. 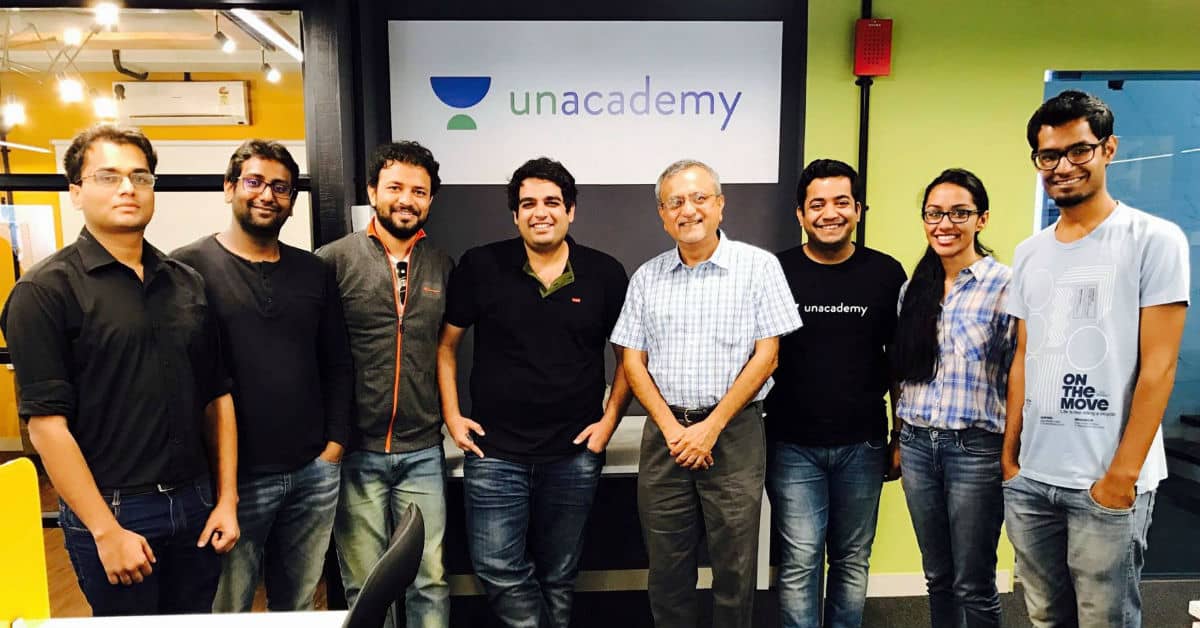 Unacademy Founders and Its Team

Unacademy was founded by three friends Gaurav Munjal, Roman Saini, and Hemesh Singh as a YouTube in 2010 with a vision of changing the Indian educational system, later registered their Unacademy as a company in 2015.

Gaurav Munjal is Chief Executive Officer ( CEO ) of Unacademy before that he founded Flatchat which he later sold to Commonfloor in 2014.

Unacademy has over 4500+ employees working day and night to create a seamless platform for its users.

The Unacademy name states that this learning platform is so much different from the conventional methods of education, unlike an institution or academy which is accessible to everyone.

Unacademy Valuation Or Net Worth

Unacademy’s vision is to offer numerous courses in multiple languages to students around the world. Unacademy aims to work with the brightest minds and empower Indian youth, who constitute 19% of the world’s population, to navigate the modern world by matching its faculty with its students. 70% of its learners come from tier 3 cities where there is a shortage of top teachers. As a result, the startup is focused on expanding its teachers, languages, and adding more exams to the existing mix.

By leveraging technology and highly qualified teachers, we aim to move closer to our mission of democratizing education at all levels, starting with exam preparation.

“We are seeing unprecedented growth and engagement of learners in smaller cities and are delighted to see high caliber educators choosing Unacademy as their primary platform to reach students,” says Gaurav Munjal, CEO of Unacademy.

Where its main chunk of revenue comes from paid membership they offer.

and also, Unacademy has adopted a freemium business model. where it offers some of its content for completely free even no ads will be placed and to access high-quality content and all of its services will charge a subscription fee.

Learning Resources – Unacademy offers a wide range of learning resources for students to support their learning. These are mainly of two types:

Although most of the pre-recorded videos are free to watch, the live sessions are chargeable.

How Successful is Their Business Model?

As they are offering content for free with ads and a reasonable fee for its subscription plans they have gained over 15 million users on their platform in just a few years.

Unacademy Revenue Model With Its Revenue and Growth.

Currently, Unacademy earns revenue from 2 main sources which are

As of Today August 2021, Unacademy has raised a total of $837.5 Million in funding in 11 funding rounds from many investors.

Unacademy originally received its first funding of $500,000 in seed funding from Blume Ventures in May 2016. The most recent funding was a $440 million Series H funding from Temasek Holdings on September 2, 2020.

One of the Investor’s message

We were thrilled with how rapidly Gaurav (Munjal) and the team converted some of our collective product brainstorming sessions into an amazing live-streaming product and a subscription business for the test prep market,” said Shailendra Singh, Managing Director of Sequoia Capital.

Unacademy has acquired 10 startups to date, strengthening its position in Edtech Sector. On July 26, 2021, the company acquired Rheo TV, a Bangalore-based video streaming app, which is the company’s latest acquisition.

Unacademy has undisclosed the acquisition’s value for many companies.

Khan Academy is an American non-profit educational organization founded in 2006 by Sal Khan to develop a series of online tools for educating students. The organization produces short lessons in the form of videos. The website also contains additional exercises and materials for educators. All resources are available free of charge to users of the website and application.

In this Khan Academy appears to be the major Competitor for not only Unacademy but also to all the Edtech companies as they provide premium content for free.

In February, Sachin Tendulkar had picked up a strategic stake in Unacademy and also became its first celebrity brand Ambassador of Unacademy and Recently Unacademy has signed a two-year contract with a former Indian skipper MS Dhoni on 11th august 2021 for an undisclosed amount.

The total market size of this EdTech startup is expected to reach $287 billion by 2023, up from $160 billion in 2017. With the largest offering of free educational videos and more than 100 million views per month, the company is working to create videos in multiple languages to help students worldwide, provide valuable content and exam preparation modules for all kinds of exams, and partner with great minds to build a strong student network.