Apple Inc. is an American multinational technology company specializing in consumer electronics, software and online services. Let us take a look at the detailed overview of Apple before moving on to the Apple Mission Statement and Vision Mission Statement. 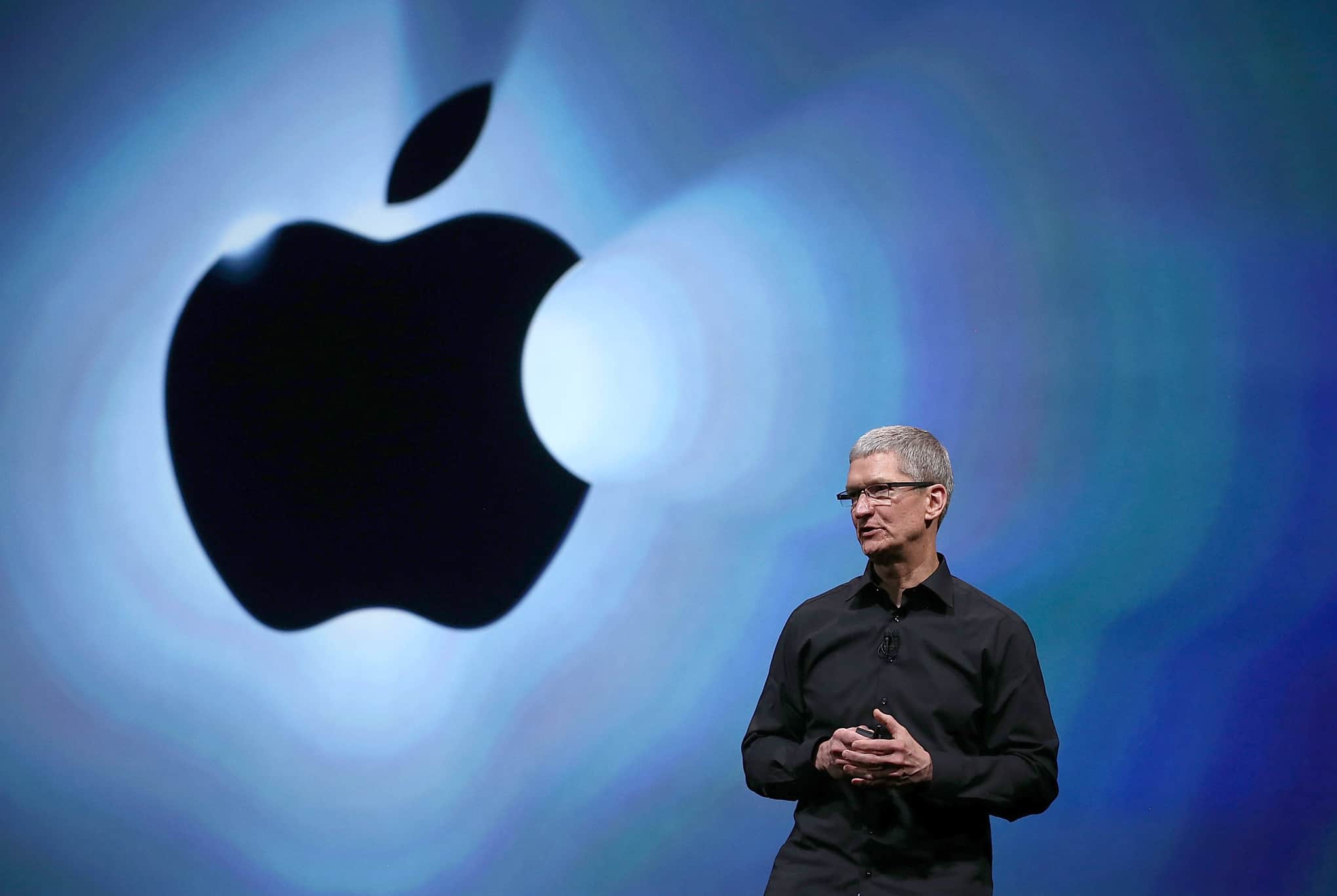 Apple Inc. is an American multinational technology company specializing in consumer electronics, software and online services, headquartered in Cupertino, California, United States. Apple is the largest technology company by revenue (totaling $365.8 billion in 2021) and the largest company in the world by market capitalization in June 2022, the fourth largest personal computer manufacturer by unit sales, and the second largest cell phone manufacturer. It is one of the Big Five U.S. information technology companies, along with Alphabet, Amazon, Meta and Microsoft.

In August 2018, Apple became the first publicly traded U.S. company to be valued at more than $1 trillion, $2 trillion in August 2020, and most recently $3 trillion in January 2022. The company has come under criticism for its contractors’ labor practices, environmental practices and business ethics, including anti-competitive practices and materials sourcing. Yet the company has a large following and enjoys a high level of brand loyalty. It is ranked as one of the most valuable brands in the world.

What does Apple Mission Statement mean?

The Apple Mission Statement underscores Apple’s commitment to providing the best products and services to meet the unique needs of each customer. It guides the company in pursuit of its long-term goals, which has contributed to its success. Apple’s mission statement consists of three core components:

Best user experience: whether it’s an iPhone, iPad, or wearable, Apple designs all of its products to be user-friendly. The company does not compromise when it comes to user experience. Apple’s products are packed with innovative and user-friendly features that provide the best experience to the end user. In 2020, Apple introduced robust location and Bluetooth permissions in iOS 13. In 2021, iOS 14 introduced an opt-in feature for ad tracking. These user-friendly privacy features can help protect iPhone users’ data and improve their experience.

Innovative products: Apple develops products that are tailored to the specific needs of its customers. Since the company’s founding, Apple has continued to redefine the standard for product design, usability and functionality. Apple’s hardware and software solutions address various market segments, including education, business and healthcare. In recent years, Apple has increased its presence in healthcare with innovative products such as the Apple Watch for detecting heart irregularities. The Apple Health Records feature for the iPhone allows patients to access their medical records through their mobile devices. In 1Q20, Apple reported quarterly revenue of $91.8 billion, with record sales of its healthcare products and services.

High-quality services: from the App Store to Apple Care to tech support, Apple is obsessed with customer service. The company handles everything from design to development to sales to repair. This hands-on approach gives Apple an edge over its competitors. In a 2020 survey, Apple is rated 51/60 for online support and 34/40 for phone support, for an overall tech support score of 85/100. This score is impressive considering that most companies provide poor customer service. This is one of the Most important factor in Apple Mission Statement.

” Apple is committed to bringing the best personal computing experience to students, educators, creative professionals and consumers around the world through its innovative hardware, software and Internet offerings. “ What does the statement of Apple Vision Statement mean?

Apple’s vision guides the company’s decision-making, strategic management and operations. It ensures that every decision moves the company closer to achieving its mission and goals. The statement has two components:

Leading in product design: from iPhones, iPads, iPods, Macs, microchips and more, Apple brings high-quality products to market. The company strives to maintain its leadership in product design and development by driving innovation. In April 2021, Apple unveiled the new iPad Pro with an industry-leading M1 chip and ultra-fast 5G. Apple’s proprietary M1 French fries push the boundaries of iPad Pro performance, making it the fastest device of its kind. The new iPad Pro is 5G capable and can reach speeds of up to 4 Gbps. 5G is the future. So Apple can be confident that this next-generation iPad will defend its global leadership position for many years to come.

Carbon neutral: Apple has set a goal to reduce its net carbon footprint to zero across all of its businesses. In 2020, the company unveiled a plan to make all Apple devices carbon neutral by 2030. According to Apple’s 2020 Environmental Progress Report, the company plans to reduce its emissions by 75% by 2030 and develop innovative solutions to eliminate the remaining 25% of CO2 emissions. “We hope that with our commitment to carbon neutrality, we can be a small ripple in the pond that makes a much bigger difference,” said Tim Cook, Apple’s CEO.

Apple’s values guide how the company and its employees operate and interact in the workplace and the world, Apple Value is not more different from Apple Mission Statement.

Accessibility: Apple enables consumers and businesses to access the hardware, software, services and technology they need to achieve their goals and aspirations. Developers rely on Apple’s App Store ecosystem to create apps. In 2020, Apple reduced the App Store commission for small businesses to 15%. The program’s reduced commission allows small developers access to the App Store and more funds to reinvest and grow their business.

Supporting Education: The Cupertino-based tech giant provides products, support and opportunities to the schools that need it most. Since 2014, Apple has been part of the connectED initiative and has donated more than $100 million worth of teaching and learning solutions to more than 100 underserved schools across the United States. “We have given every student an iPad, every teacher a Mac and an iPad, and every classroom an Apple TV,” Apple said.

A world-class plan, Apple is carbon neutral and working to make all of its products with clean energy and no carbon footprint by 2030. In 2021, Apple announced the Restore Fund, a unique carbon reduction initiative. The company will invest $200 million in forestry projects to remove approximately 1 million tons of CO2 from the atmosphere annually. This initiative builds on Apple’s ongoing work to protect forests, including a partnership with organizations in Colombia to restore a 27,000-acre mangrove forest.

We Are All In Apple has strengthened its long-standing commitment to increasing workplace inclusion and promoting equality around the world. In May 2021, Apple fired Antonio García Martínez, one of its advertising managers, for making sexist and racist comments in his 2016 book “Chaos Monkeys.” More than 2,000 Apple employees signed an internal petition denouncing sexism and racism. Apple values inclusion and diversity in the workplace. “Behavior that demeans or discriminates against people based on their race has no place in our company,” Apple said.

Privacy is a human right: Apple designs its products to protect consumers’ privacy and give them control over their data. The company believes that privacy is a fundamental human right. In April 2021, Apple updated its iOS with new privacy controls designed to protect iPhone users from being tracked by digital advertisers. Apple’s more than 1 billion iPhone users will receive a pop-up notification in some apps asking for consent to collect data. This feature ensures that apps and third-party websites cannot use customers’ data to track them online.

Racial equity and justice: as the world’s leading technology company, Apple acknowledges its responsibility to fight systemic racism and injustice around the world. The company has committed $100 million through the Racial Equity and Justice Initiative (REJI) to combat the racism faced by communities of color. Apple had banned Parler from the App Store on Jan. 6 for allowing its users to spread hate and plot to storm the U.S. Congress. In April 2021, Apple reinstated Parler to the App Store after implementing new updates to detect unlawful content and hate speech.

Supplier Responsibility: Apple requires its suppliers to adhere to the highest labor and human rights standards, health and safety standards, and environmental practices. To achieve this, the company conducts a rigorous process to assess supplier performance in these three areas. In 2019, Apple conducted 80 assessments at manufacturing facilities, 50 in the services supply chain and 291 assessments at smelters and refineries.