The world’s most expensive Tequila comes in various bottle shapes, flavors, and distillation methods. Some are expensive for the Tequila itself, others for the bottle in which it is stored.

Tequila is a distilled beverage from a specific region, namely Tequila, and the surrounding areas in Spain, hence the name. This alcoholic beverage is made from blue agave; you can drink it neat or in a cocktail. In recent years, the market for Tequila has experienced strong growth.

The consumption of ultra-premium and premium tequila has gained prominence over other alcoholic spirits. There have been several changes in this decade, and it is fantastic how this drink has solidified its position in the alcohol market.

How Tequila is Made?

Distilled in wooden casks for periods, which may range from a few months to a few years, the pina of the blue agave plant or its central stems are cut out, steam-cooked and fermented, and then distilled at least twice before being bottled.

Mexican law requires all tequila bottles to contain at least 51% Weber Blue Agave in their distilled product. This plant is found in various regions of Mexico, but it grows in red soils more than 1500 feet above sea level.

After the pinas are baked or steamed, the sweet juice is squeezed from the stems, and then yeast is added to start the fermentation process. The tepache or juice from the baked pinas is fermented in vats until the mixture reaches 5% or ten percent alcohol content. It is then distilled until the mixture reaches 55% alcohol or 110 proof. To bring the final result to 76-80 proof, water is added during bottling. 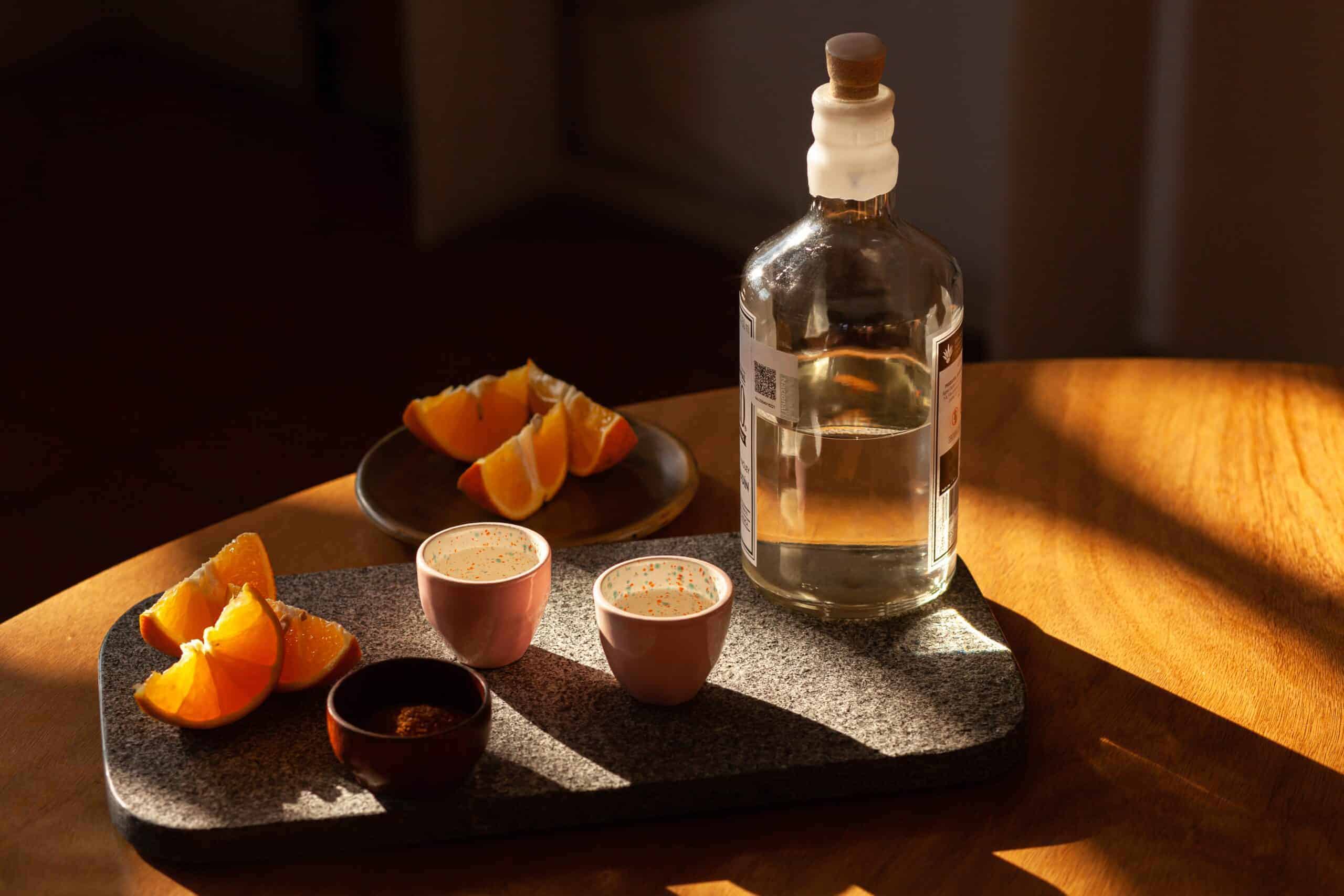 There are five types of tequila, depending on the maturation process:

3 Possible Reasons Why There are Expensive

Also, Read Coca Cola Slogans which made coca-cola one of the world’s largest beverages companies in the world.

Check Before Buying a Most Expensive Tequila

Let’s get started with Most Expensive Tequila in the world. 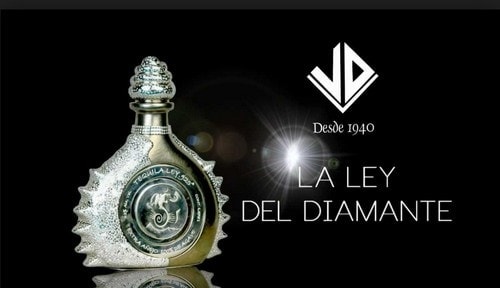 Tequila Ley .925 Diamante is a highland tequila sold in a magnificent bottle made of .925 pure platinum weighing 3.725 kg and decorated with four thousand one hundred white diamonds weighing 328.59 carats. It took nearly ten months and the hard work of seventeen artisans to create the bottle that contains this remarkable spirit.

The designer of this most expensive alcohol bottle is Jose Davalos Mejia. Since its creation, it has been exhibited in various cities like Paris, Moscow, London, and Berlin.

Clase Azul is a renowned brand that has been dealing in tequila since the year 1997. The company has come a long way since its debut and now offers the most expensive bottles of tequila. Clase Azul 15th Anniversary Edition as the name suggests celebrating fifteen years in business.

With a price tag of $30,000, it was one of the most expensive tequilas in the world. It was a limited edition to maintain its exclusivity. The band released only fifteen bottles to celebrate fifteen years. 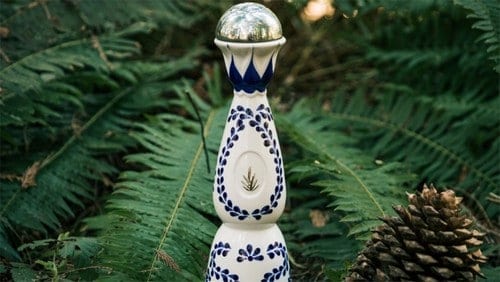 The total collection of the bottles was estimated at $450,000, which the company plans to donate to a nonprofit organization Fundacion con Causa Azul.

Clase Azul 15th Anniversary Edition bottle is made of ceramic and decorated with 24-karat gold and amber. The tequila is made as an indulgent drink and is not meant to be drunk as a shot. The contents are a blend of two reserve tequilas that are ultra-matured.

Ley.925 Tequila Pasion Azteca Ultra Premium Anejo is in the world-famous Guinness Book of Records as the most expensive tequila sold to a Mexican collector in 2006 for the exorbitant amount of $225,000.

Ley.925 Tequila Pasion Azteca Ultra Premium Anejo is made from the pure sap of the Blue Agave plant. After distillation, it was aged in barrels for six years. The actual price of the spirit comes from the handmade bottle.

It was split into two custom pieces of pure white gold and pure platinum with yellow gold. The premium drink is a custom-made one-liter bottle. It was designed by Fernando Altamirano, the CEO of Ley .925.

One of the most expensive bottles of tequila is undoubtedly AsomBroso Reserva Del Porto Tequila with a price of 2,800 US dollars.

It is part of a limited series, and the brand only releases a limited amount of alcohol for consumption. Each of the luxurious decanters is handmade in Italy and features a crystal stopper. 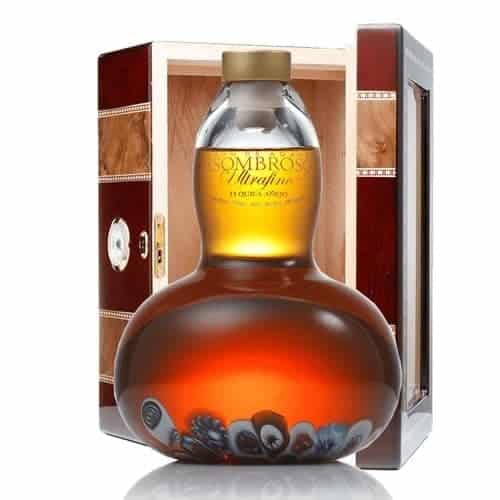 The most expensive tequila, AsomBroso Reserva Del Porto Tequila, is made from ripe blue agave that is hand-selected by the distillers. It is processed and aged for five years in French oak barrels and later again for eleven years in Portuguese port wine barrels, which have high sugar content.

This is done to make the liqueur sweet so that it later proves to be a great sipping drink. The vintage is dated on the bottle, and each bottle is numbered and signed. The Vintage Extra-Anejo Tequila is highly sought after for its silky and smooth taste and semi-sweet wild cherry flavor.

At $2,000 US, Barrique de Ponciano Porfidio Tequila is one of the most expensive tequilas in the world. It is part of a limited series, as the brand has decided to release only two thousand bottles each year to preserve its exclusive character. 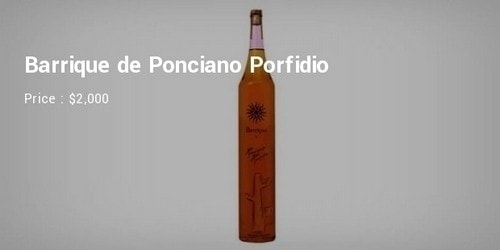 Barrique de Ponciano Porfidio Tequila was made using 100% blue agave. It was distilled and redistilled to get the right rich, smooth taste and then aged for ten years in inexpensive French Limousin oak barrels.

The most expensive tequila was bottled in a seventeen-inch tall, handcrafted glass bottle decorated with letters of 21-karat gold. This amber-colored, flavorful Anejo is a hit among tequila lovers. 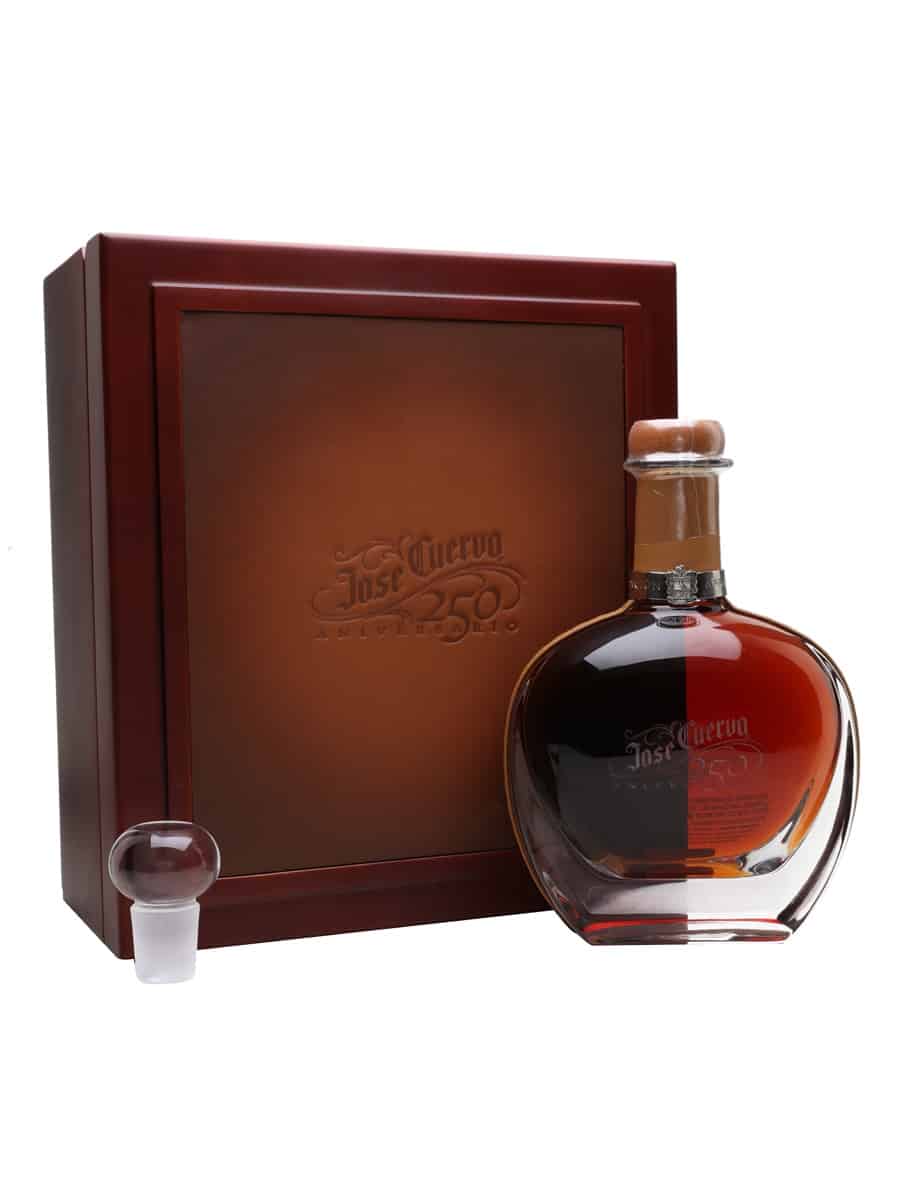 This Extra Añejo is both intense in flavor and warm in the mouth. On the nose, the tequila announces itself with citrus, sherry, and smoke. Flavors include butterscotch, chocolate, and vanilla with a smooth mouthfeel. It is moderately creamy and mild.

The dark amber color is presented in a beautiful, sleek glass decanter. It will charm you with its modesty and warm feeling on the palate.

1800 Coleccion is a well-known brand owned by the Beckmann family. One of their premium products is 1800 Coleccion Tequila, named after the year the tequila was first aged in oak barrels. At US$1,800, it is one of the most expensive tequilas the company markets worldwide. 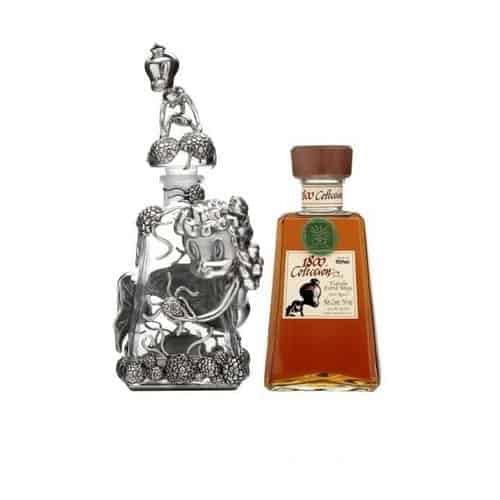 1800 Coleccion Tequila is made from ripe agave and distilled twice for ten years in French oak barrels to give it a special flavor. This blended tequila with heavenly smell and delicate taste has a golden color and you will find a hint of almond on the tongue.

The drink should be sipped slowly for you to enjoy it properly. The most expensive tequila is bottled in a custom Belgian crystal bottle decorated with pewter and designed by Bosco Sodi and Gary Baseman. Later, it is placed in a gorgeous suede case.

At $1,700, Clase Azul Extra Anejo (Ultra) Tequila is on the list of the most expensive tequilas in the world. It is a limited edition, as only one hundred bottles were released. Half of them were destined for the Mexican market and the other half for the US market. 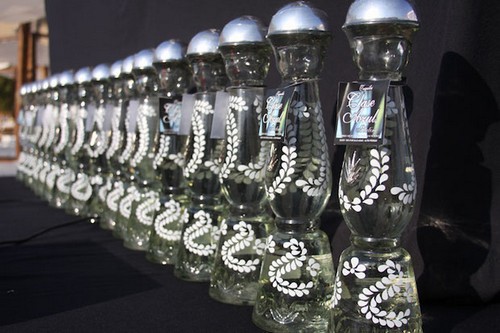 Clase Azul Extra Anejo (Ultra) Tequila was produced at Fino’s de Agave distillery and is made using 100% blue agave Tequilliana Weber. After harvesting and distillation, it is aged for several years in sherry oak barrels.

The tequila is a deep red color and tastes heavenly. Keep in mind that it should be drunk slowly. The brand has used handmade decanters made of ceramic and finished with 24-karat gold, silver, and platinum to give it a stunning look. 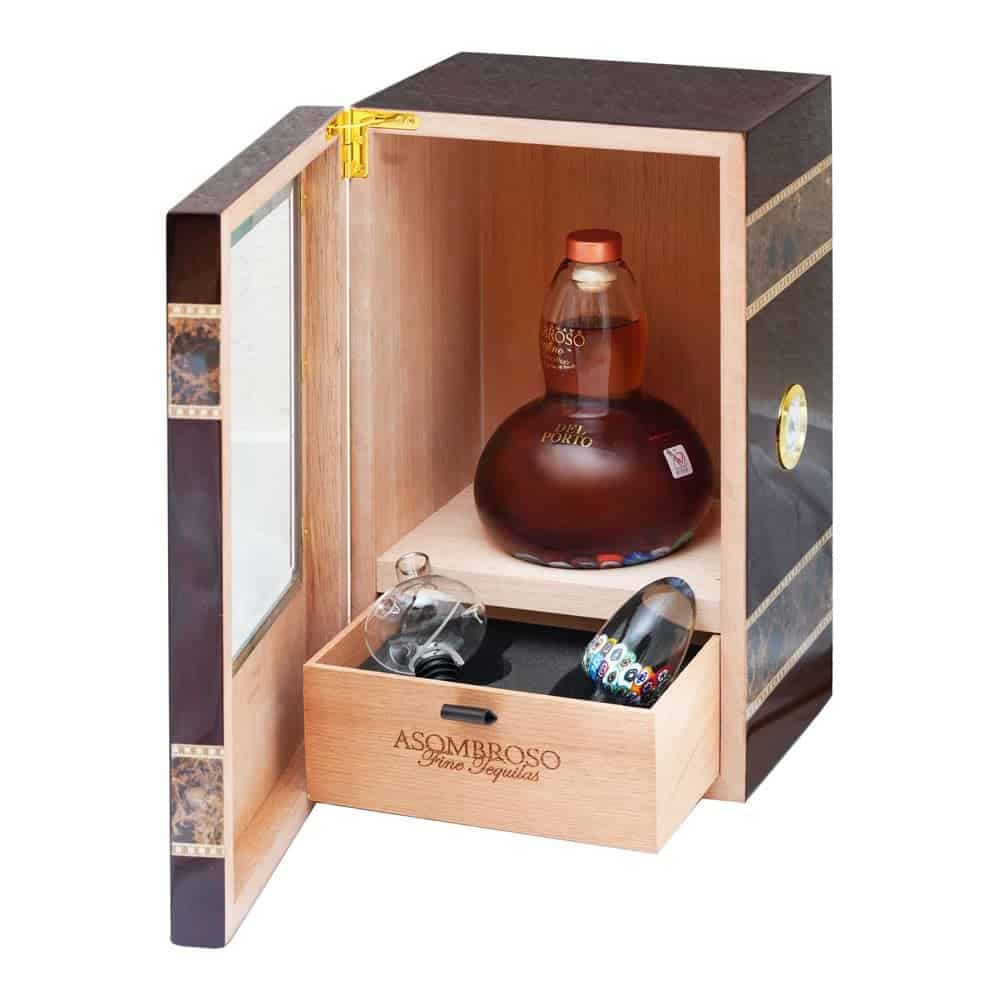 No tequila on this list has aged longer than the AsomBroso del Porto Extra Añejo. First, it rests in oak barrels for 11 years. Then it ages for another 11 years in barrels that were used to make port in Portugal. Finally, it is bottled in a hand-blown Italian glass bottle, said to be a replica of an eighteenth-century decanter found in a European castle. This smooth, silky tequila delights with notes of port and toffee. And when you buy a bottle of this Extra Añejo on AsomBroso’s website, you get a bottle of their 11-year-old tequila for just $1 with it.

Rey Sol Anejo Tequila has a price tag of 400 US dollars and has gained entry into the list of most expensive tequila in the world. The brand was founded in the year 1886 by its founder Don Delfino Gonzalez and has managed to produce some amazing tequila. 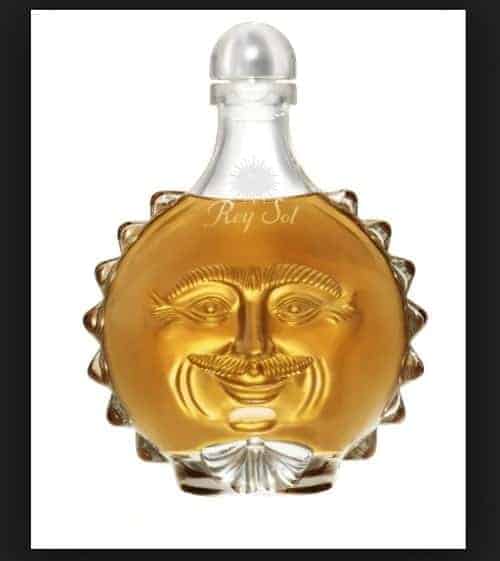 The most expensive tequila Rey Sol Anejo Tequila is aged for five years in French oak barrels. This is done to bring out exquisite flavors of spice, vanilla, and caramel. The woody notes are prominent, and you will get a hint of sunshine on the tongue that finishes with a nutty sweetness.

The amber golden tequila is filled in beautifully designed sun-shaped bottles that appear as if they are smiling happily.

At $379, Tres-Quatro-Cinco Tequila has joined the club of the world’s most expensive tequilas. It is made by Enrique Fonseca, who has made a name for himself as a master blender and distiller. 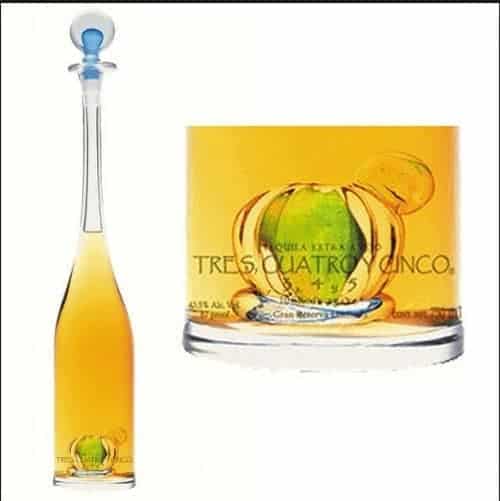 The spectacular Extra-Anejo, ultra-premium tequila is made by blending three tequilas, 30% aged for three years, 50% aged for five years, and 40% aged for four years in French oak barrels. This is done to achieve optimal taste and aroma.

The most expensive tequila Tres-Quatro-Cinco Tequila has a golden brown color and is bottled in crystal decanters. The premium bottles were personally designed and signed by Alonso Gonzalez Junior, a famous Mexican artist.

This tequila is meant to be enjoyed slowly. It is part of the limited series, as the brand only releases one thousand bottles per year.

At $360 US, Casa Herradura Seleccion Suprema Tequila is one of the most expensive tequilas in the world. This premium drink was created in the year 1990. This particular tequila has managed to impress tequila enthusiasts as the best. 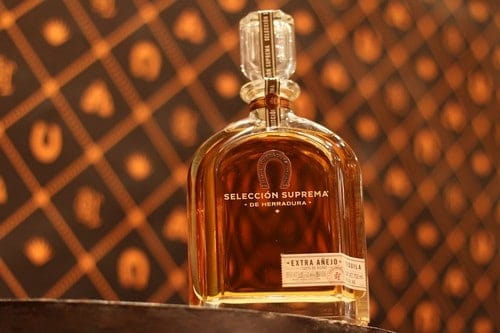 It has won awards and prizes, for example in the 2012 Gold Medal at the San Francisco World Spirits Competition.

Casa Herradura Seleccion Suprema Tequila is a premium spirit with a smooth finish after each sip. To achieve the desired flavor, the agave is harvested with the pina and cooked in stone and brick ovens for nearly twenty-four hours. It is then aged for forty-nine months.

The most expensive tequila has an aroma of rose petals, vanilla, wood, and agave, and a creamy and smooth finish. The alcohol content of this famous spirit is 40%. It is bottled in a beautiful amber bottle to give it a distinctive look.