Groww is a Bengaluru-based online investment platform founded in 2016 by four ex-Flipkart employees. Groww is the first Indian fintech company to offer mutual fund direct access where users have full access to their portfolio which is loved by everyone.

Now let us see an overview of the company before moving on to Groww Business Model. 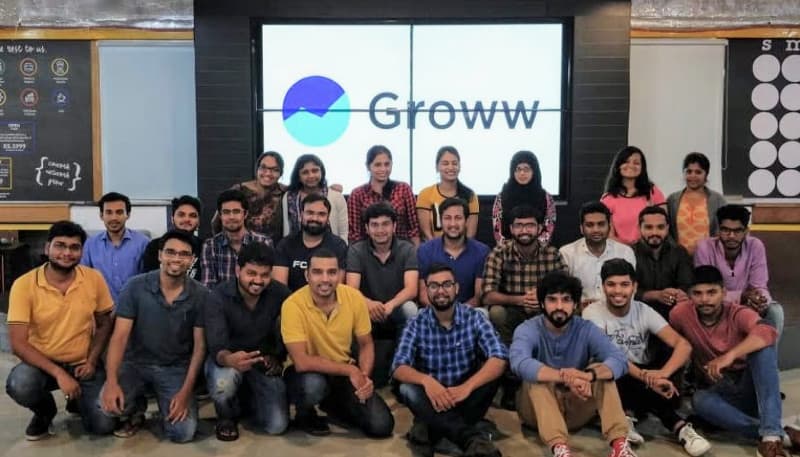 Groww is a Bangalore-based brokerage firm that offers online discount brokerage services for the least fee in the market. In Groww we can invest directly in stocks, IPOs, and mutual funds. Next billion Technology Private Limited is the parent company of Groww.

Groww follows a DIY (Do It Yourself) model for its users, in which investors establish and manage their own investment portfolios individually without any third party, which is preferred by most GenC’s.

Initially, Groww started as a platform for direct investment in mutual funds in 2016. But after user demand and surge in stock investing and trading, Groww added stock brokerage in 2020 and also launched digital gold, ETFs, Intraday trading, IPOs services in the same year.

There are about 100 crore people in India with disposable income, but only about 2 crore people are actively investing as per the latest report. Groww’s goal was to provide consumers with a transparent and very easily Understandable process.

What Is The Tagline Of Groww?

How Simple is Groww Platform?

One can open a paperless account instantly with ease. If one wants to participate in the primary market, one can submit an online application for an IPO. A Brokerage Calculator is included in the software.

Groww Founders and Its Team

Groww was founded by four ex-Flipkart employees named Lalit Keshre, Harsh Jain, Neeraj Singh, and Ishan Bansal in 2016. with a mission to make investment more accessible to young people by simplifying the process at a level best.

Lalit Keshre is the current CEO of Groww. Lalit looks after all aspects of the company, especially the product and customer experience at Groww. Before founding Groww, Lalit was a senior product management executive at Flipkart, where he launched and led Flipkart Quick and helped launch Flipkart Marketplace. He also founded an online learning company called Eduflix and was a team member at Ittiam Systems. Lalit is an alumnus of IIT Bombay.

Harsh Jain is currently the Head of Growth and Business at Groww Before joining Groww, Harsh was part of the product management team at Flipkart. Before that, Harsh was a co-founder of a storytelling startup. Harsh has a B-Tech in Electrical Engineering and a Masters in Information and Communication Engineering from IIT Delhi. He also completed an MBA in Product Management and Marketing from UCLA School of Management.

Neeraj Singh leads product development and customer research at Groww. He is a passionate engineer, solution developer, and programmer. Neeraj worked at Flipkart as Engineering Manager and built Flipkart’s customer return and refund system before founding Groww. Neeraj holds a BE degree in Information Technology from ITM, Gwalior, and a PG diploma in Advanced Computing from CDAC.

The fourth founding member is Ishan Bansal, who is currently the Head of Finance at Groww. Before this, Ishan worked at Flipkart in corporate development. He was also responsible for corporate development and M&A at Naspers. Ishan is a graduate from BITS Pilani, has an MBA in Finance from XLRI, Jamshedpur, and is a CFA charter holder.

The Founding team believed that investments in financial products in India are very complex and non-transparent after they started researching the Indian financial sector for interested consumers by spending a lot of time learning about the markets and identifying what are the problems users were facing. They had to conduct numerous tests to determine the best user experience. Since it user’s hard-earned money was at stake, they had to provide a secure solution that took some time to develop.

What Made Them To Start Groww By Quitting Flipkart?

During their time at Flipkart, they witnessed the changes in the e-commerce market and realized that investment was the next big opportunity. The e-commerce boom signaled a rise in average income and technology awareness, and it was at this point that the founders realized that individuals did indeed have discretionary funds and needed support to use them wisely.

Is Groww Safe to Invest Our Money?

Groww is a completely safe and secure trading platform with SSL certification and 128-bit encryption, one of the most secure encryption Technology.

In addition to that, Groww is a SEBI registered broker and also a member of NSE, BSE, and a mutual fund distributor registered with AMFI. As a member of these regulatory bodies, the company’s transactions are reviewed at regular intervals to protect the interests of investors.

The company’s mission state is to give investors the best experience possible when it comes to managing money.

Lalit Keshre, Co-founder and CEO, Groww, said in an Interview

Over the last few years, we have made investing in mutual funds and stocks simple and transparent for millions of investors in India. If we look at the opportunity that lies ahead, it still feels like Day 1. We started our journey with small steps writing blogs and making videos to educate people about investing. Our wealth as a nation will keep growing, and our mission is to provide the best experience for investors to manage their wealth. We are happy to partner with investors who believe in our long-term vision.

But the company profit is replyed on the funds they sell, which is a very complex process. let’s understand how it works

In mutual funds, there are two types of investments Regular and Direct.

In Regular mode, the user has to buy mutual funds through their distributor who charges an X% of commission for the service. The Commission amount is charged in such a way that your investment and profit amount will be compensated.

In Direct mode, the users can choose multiple mutual funds and stocks in a single platform like Groww.

Groww and other direct investment platforms’ only aim is to increases their user base and To reach the right set of audiences Groww uses technology that reduces the operating cost significantly.

Also, users don’t need to switch between multiple investment platforms so that the customer will stay long in their platform, and due to current technological advancements, users can stay invested 24/365 from anywhere around the world.

So, How Does Groww Make Money?

In Simple, Groww Make Money by providing premium features such as advisory services on investment and portfolio.

The Y Combinator-backed company saw a respectable increase in earnings but still lags behind its competitors Zerodha and Upstox, which generate earnings of Rs 1,094 crore and Rs 148 crore respectively. Groww earned a total of Rs 1 crore in FY20, while ET Money earned a total of Rs 2.24 crore.

They are expanding rapidly but the founders of Groww have taken the company to unicorn status. They recently received money and were named a unicorn startup.

Groww is one of the few startups in India which is loved by investors.

Groww has acquired only one company to date which is Indiabulls AMC On 11th May 2021 for around Rs 180 crore.

Comparison of Groww with its major competitors :

In the coming months, Groww will offer deposits, US equities, government gold bonds, futures & options, and other derivative products. Since the company’s inception, Groww has focused on financial education materials.

Lalit Keshre, managing director and co-founder, said in an interview.

” Our philosophy has been to create an internet financial company based on best user experience, transparency, and simplicity to offer all investment products to Indian retail investors. While we cannot advise our customers on what to buy or sell, we can provide them with the right information through our educational initiatives,”

The company plans to launch a series of financial education projects for millennials over the next two years and expand its financial services sector. It plans to add around 7 million customers between September 2020 and April 2021, 60% of which will be in tier-2 cities and beyond, according to the company.

What does Groww do?

Groww is an online investment platform that allows users to invest directly in mutual funds and stocks. The company is the inventor of a platform for direct access to mutual funds.

What is Valuation Of Groww?