Netflix, Inc. is an American OTT content platform and production company headquartered in Los Gatos, California. Netflix was founded in 1997 by Reed Hastings and Marc Randolph. The company’s primary business is an online-based subscription streaming service offering a vast library of films and television series, including those produced in-house. In April 2021, Netflix had 208 million subscribers, including 74 million in the United States and Canada. The company has offices in Canada, France, Brazil, the Netherlands, India, Japan, South Korea, and the United Kingdom. Netflix is a member of the Motion Picture Association, producing and distributing content from countries all over the globe. let us see an overview of Netflix before learning Netflix swot analysis

In 1997, Reed Hastings and Marc Randolph co-founded Netflix, starting as a DVD sales and rental by mail, but after a year, they focused on an online DVD rental service.

In 2007, Netflix introduced streaming media online while retaining its DVD rental service. They started expanding online streaming internationally in 2010. With such a global reach, Netflix’s profits tripled this year.

Today it has over 210 million subscribers worldwide thanks to lockdown; Netflix has grown exponentially over the years. It is one of the leading internet entertainment services in the world, with paid memberships in over 190 countries.

Over 70% to 80% of the subscribers binge-watch the TV series on Netflix. Not just a TV series, it offers movies, documentaries, and feature films with various genres and languages.

Then lead entertainment company blockbuster turn down the chance to buy Netflix for just $50 million in 2000, but now Netflix is worth over $200 billion, and blockbuster is nowhere.

I think by now you would have got some fundamental knowledge about the company. Now, let have a look at Netflix’s SWOT analysis. 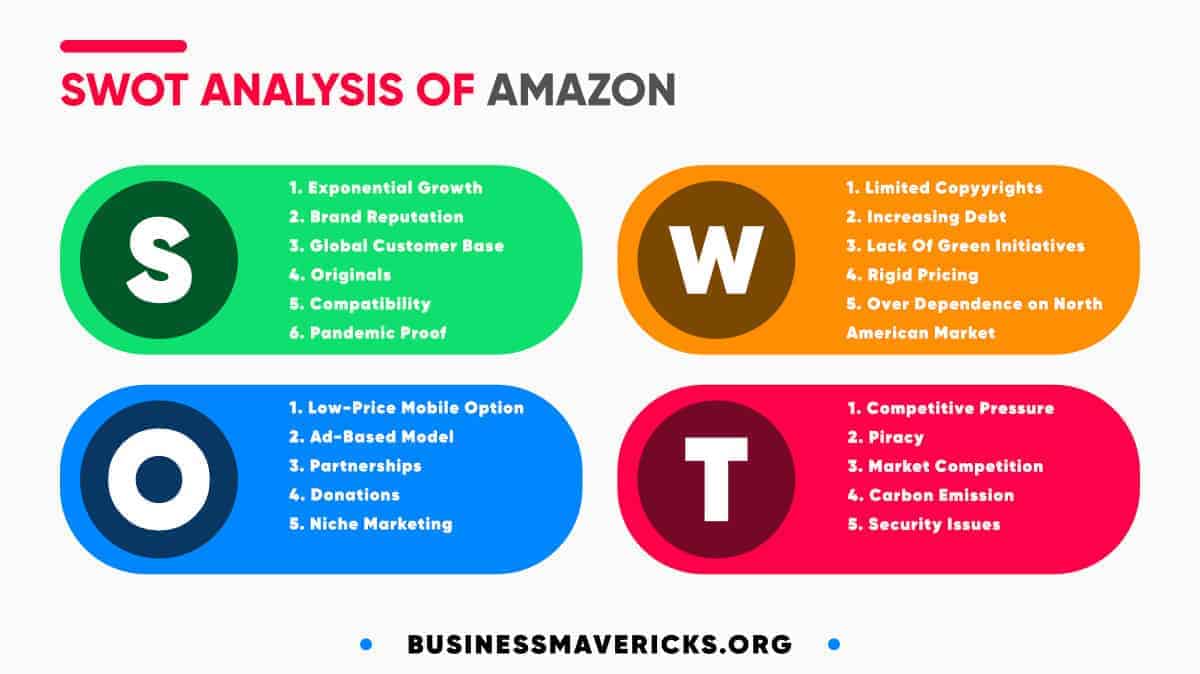 As an essential component of SWOT, a company’s strength is its asset to plan its expansion. Netflix has several strengths that make them one of the top streaming services:

1. Exponential Growth: In the past ten years, Netflix has become the most influential brand for online streaming content worldwide, and it will go long.

2. Brand Reputation: Netflix has risen to become a household name within a short period. In 2019, Netflix ranked #4 in top regarded companies by the most popular magazine Forbes in the global top 2000 list.

3. Global Customer Base: Netflix is serving over 190 countries across the world. There are over 210 million subscribers of Netflix, and it gives the company strong, commanding power with the studios for securing exclusive content.

4. Originals: Biggest strength of Netflix is its original content over the past few years with the highest possible quality. Some of its shows like Dark, Stranger things, Money Heist, Narcos, and 100 is the New Black became so popular that its subscriber count kept increasing over the quarters.

5. Compatibility: Netflix adapted to various technologies instantly by providing streaming Services on all internet-connected devices like personal computers, iPads, mobile devices, and televisions. Which helped their business grew immensely over the years.

6. Pandemic Proof: we all knew that covid hit us hard for the past few years in which many businesses were shut and somewhere running in losses, but Netflix increased its customer base, market cap, revenue, and profits.

Everybody has positive and negative sides; likewise, Netflix has its weaknesses. Though Netflix remains an OTT king, there is much weakness that may become a nightmare to Netflix for its growth.

1. Limited Copyrights – Netflix doesn’t own most of the content it shows in their library, affecting the company directly. The licenses taken from the production house expire after some period of time; after expiration, content should be taken down from their library.

2. Increasing Debt – As Netflix is started to make their own content, they need more money to fund its projects debt to fund new content. Today, Netflix reported $15.8 billion in debt and planned to raise $1 billion more through a debt offering. The increase in debt every year is a major weakness.

3. Lack of Green Initiatives – Netflix has still not utilized renewable energy and hasn’t created a business model to promote environmental sustainability. Contrary to this, tech companies like Amazon, Google, Apple, and Facebook have already started using renewable energy to help sustain the environment. The four tech giants have committed to using 100% renewable energy for their businesses. The lack of green energy utilization harms the brand image of Netflix.

4. Rigid Pricing – Customers demand customized pricing with more options. Unfortunately, Netflix’s pricing model is rigid, with only three tiers, Basic, Standard, and Premium. The lack of different options has contributed to stagnation in the number of new subscriptions.

5. Over-dependence on North America Market – Even though Netflix operates globally, it relies heavily on the North American market. In the fiscal year 2019, Netflix reported $10.05 Billion in revenue from North America, representing about 50% of its total revenue ($20.15 Billion). This is a major weakness because the North American Market is nearing saturation.

6. Support Shortages – The number of Netflix users and hacked accounts increased in the first six months of 2020 because people were stuck at home due to the Pandemic. To make matters worse, Netflix reduced support hours. Users were frustrated by the shortage of customer support and had to wait longer to retake their accounts compromised by hackers.

7. Raising Prices – Netflix has raised its subscription prices, while other new video streaming services such as Disney+ ($6.99 per month) and Apple TV+($4.99 per month) have introduced their services at much lower prices.

1. Low–Price Mobile Streaming Option: Netflix can offer a lower-priced option to retain subscribers in other international markets as it did in India for just $3/Month. They should rethink it to expand this kind of offers in other counties too.

2. Exploit Ad-Based Mode: Other streaming services like youtube, Disney, MX Player uses a hybrid business model for its customer where they use both subscription and ads based models which helps them to earns revenue from multiple sources if Netflix can adopt an advertising-based business model too and boost their revenue at least by 15% to 20%.

3. New Content library: It can expand its content licensing by increasing the contracts with numerous production houses worldwide. Additionally, Netflix can also refresh its content library as it is now producing its original content more nowadays.

4. Alliances: It can also alliance with various internet companies, production companies and offer bundle packages in different countries. Partnerships can prove to be beneficial for Netflix.

5. Donations: Netflix has pledged its holding from now on to support Black communities, which amounts to $100 million. It shows great Corporate Social Responsibility and helps to improve its brand credibility.

6. Discounted Annual Subscription: Whenever Netflix releases new or fresh content, users will often pay for one month only and binge-watch all their favorite shows within a short period. Netflix loses a lot of revenue because users can cancel their subscriptions once they have gone through all the new content without penalty. The company can increase its revenue by introducing an annual subscription with discounts to encourage monthly subscribers to switch to yearly plans.

7. Niche Marketing: Producing region-specific content in their local languages is another big opportunity for Netflix. Niche marketing has been proven beneficial for Netflix. For example, it started an original TV series ‘Sacred Games’ in India, and Spanish series ‘La Casa de Papel‘ (Money Heist), which are massive hits.

1. Competitive Pressure: Netflix is not the only one that provides digital streaming around the world. Its competitor keeps increasing every year. Disney+, Apple TV+, HBO, Amazon Prime, Hulu, and youtube are competing continuously with Netflix by giving repeated access to new and original content to its subscribers at a lower price.

2. Piracy: Digital piracy is still at its peak as thousands of people worldwide find ways of downloading media content because of high monthly costs, which they cannot afford. It is another big threat Netflix faces and also other streaming services.

3. Market Competitors: Netflix added 420,000 U.S. subscribers in Q4 of 2019 and lower than its target of 600,000. In Canada, its target was 218,000, but it added only 125,000 subscribers. For the third quarter in a row, the North American subscriber growth has slowed because the market is reaching competition. Netflix will find it harder to add new subscribers in the future due to market competition.

4. Carbon Emission: According to a study by Shift Project, digital technologies have a larger carbon footprint than the aerospace industry. Online video streaming generates nearly 1% of global emissions. High carbon emission is a major threat in this age and time where countries across the world are threatened by climate change. They can decide to restrict Netflix’s usage.

5. Security Issue: The number of hacked Netflix user accounts increased drastically in Q1 and Q2 of 2020, increasing daily users due to lockdown. If account hacking persists into the future, frustrated Netflix users can mass migrate to rival companies. Deleted:

The SWOT analysis of Netflix highlights where the brand currently stands and its threats in this era. Following are a few suggestions for Netflix that were recommended after this detailed analysis: