Apple Inc. is an American multinational technology company specializing in consumer electronics, computer software, and online services. Apple is the largest information technology company by revenue ( totalling $274.5 billion in 2020 ) and the most valuable company in the world as of January 2021. Let us look into the Overview of Apple and then we can move on to the SWOT Analysis of Apple.

Apple Inc. is an American multinational technology company specializing in consumer electronics, computer software, and online services. Apple is the largest information technology company by revenue ( totalling $274.5 billion in 2020) and the world’s most valuable company as of January 2021. As of 2021, Apple is the fourth largest PC by unit sales and the fourth-largest smartphone maker. The company joins Amazon, Google (Alphabet), Facebook (Meta) and Microsoft in the Big Five of American information technology.

Apple was founded in 1976 by Steve Jobs, Steve Wozniak and Ronald Wayne to develop and sell Wozniak’s Apple I personal computer. The company was incorporated as Apple Computer, Inc. by Jobs and Wozniak in 1977, and sales of its computers, including the Apple II, grew rapidly. The company went public in 1980 and had immediate financial success.

Over the next few years, Apple launched new computers with innovative graphical user interfaces, such as the original Macintosh, which was heralded in the critically acclaimed “1984” commercial directed by Ridley Scott. The high cost of the products and limited application library led to problems, as did infighting between executives. In 1985, Wozniak left Apple amicably while Jobs resigned to form NeXT, taking some Apple employees with him. 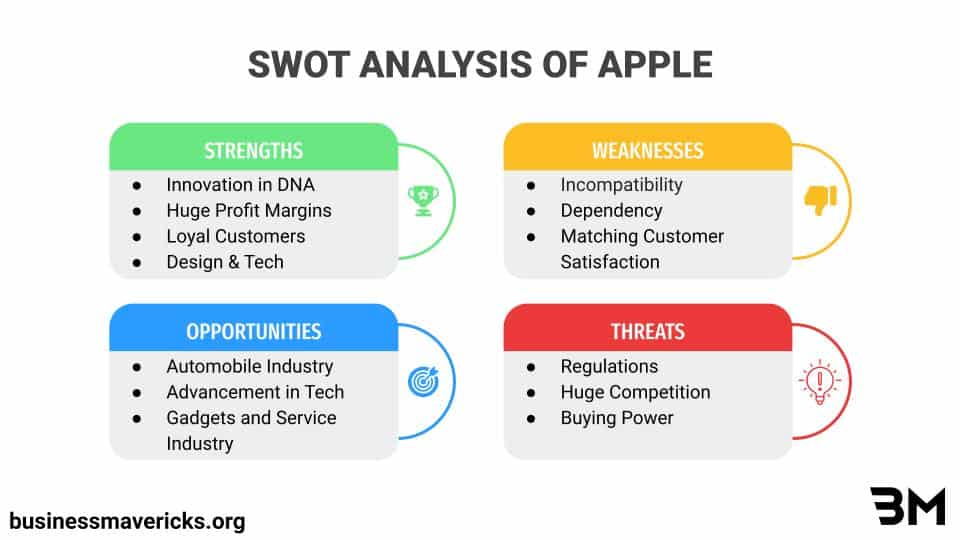 Following the detailed SWOT Analysis of Apple, we have a few suggestions from Business Mavericks:

1. Google LLC is an American multinational technology company specializing in services and products related to the Internet, including online advertising technologies, a search engine, cloud computing, software, and hardware. It is considered one of the top five companies in the American information technology industry, along with Amazon, Apple, Meta (Facebook), and Microsoft.

Google was founded on September 4, 1998, by Larry Page and Sergey Brin when they were graduate students at Stanford College in California. Together, they own about 14% of the publicly traded shares and control 56% of shareholder voting rights through supervoting shares.

The company went public in 2004 through an initial public offering. In 2015, Google was restructured to become a wholly-owned subsidiary of Alphabet Inc. Google is Alphabet’s largest subsidiary and is a holding company for Alphabet’s Internet properties and interests. Sundar Pichai was appointed CEO of Google on October 24, 2015, replacing Larry Page, who became CEO of Alphabet. On December 3, 2019, Pichai also became the CEO of Alphabet.

2. Samsung Group is a South Korean multinational manufacturing conglomerate headquartered in Samsung Town, Seoul, South Korea. It comprises numerous affiliated companies, most of which are united under the Samsung brand, and is the largest South Korean chaebol (business conglomerate). As of 2020, Samsung has the 8th highest brand value in the world.

Samsung was founded in 1938 by Lee Byung-Chul as a trading company. Over the next three decades, the group diversified into areas such as food processing, textiles, insurance, securities and retail. In the late 1960s, Samsung entered the electronics industry, and in the mid-1970s, it entered the construction and shipbuilding industries; these areas would determine the company’s continued growth. After Lee died in 1987, Samsung was divided into five business groups – Samsung Group, Shinsegae Group, CJ Group and Hansol Group, and Joongang Group.

3. Dell is an American multinational computer technology company that designs, sells, repairs, and supports computers and related products and services. It is owned by its parent company, Dell Technologies. Founded in 1984 by Michael Dell, the company is one of the largest technology corporations in the world and employs more than 165,000 people in the United States and around the world.

Dell sells PCs, servers, data storage, network switches, software, computer peripherals, HDTVs, cameras, printers, and electronics from other manufacturers. The company is known for its innovations in supply chain management and e-commerce, particularly its direct-sales model and its “build-to-order” or “configuration-to-order” approach to manufacturing, which delivers custom PCs configured to customer specifications.

Its best-known hardware products are the Xbox video game consoles and the Microsoft Surface line of touchscreen computers. Microsoft ranks 21st in the 2020 Fortune 500 ranking of the largest U.S. companies by total revenue and was the world’s largest software company by revenue in 2016. It is considered one of the top five companies in the US information technology industry, along with Amazon, Google (Alphabet), Apple and Facebook (Meta).

Microsoft (the word is a portmanteau of “microcomputer software”) was founded on April 4, 1975, by Bill Gates and Paul Allen to develop and sell BASIC interpreters for the Altair 8800. By the mid-1980s, the company dominated the personal computer operating system market with MS-DOS, followed by Microsoft Windows.

The company’s initial public offering in 1986 and the subsequent rise in its stock price produced three billionaires and an estimated 12,000 millionaires among Microsoft employees. Since the 1990s, the company has increasingly moved away from the operating systems market and made a series of corporate acquisitions. The largest of these was the acquisition of LinkedIn for $26.2 billion in December 2016, followed by the acquisition of Skype Technologies for $8.5 billion in May 2011.

HP is listed on the New York Stock Exchange and is a component of the S&P 500 Index. HP is the world’s second-largest PC maker by unit sales, behind China’s Lenovo, as of January 2021. HP ranks 58th on the 2018 Fortune 500 list of the largest companies in the United States based on total revenue.